It was in September that the Cricklewood-based charity Ashford Place launched a new initiative to reduce the isolation felt by elderly Irish, including those living with dementia, as the crisis continues to drag on.
The charity looked to brighten up the lives of their elderly Irish clients missing social interaction by launching the ongoing series of celebrity driven video conferencing chats.

Entitled ‘A Conversation With…’ the series was kicked off by Michelle Collins, the actress who is well known for playing Cindy Beale in Eastenders as well as playing Rovers Return landlady Stella Price in Coronation Street.
Just last year Ashford Place announced the actress had been made ambassador for Dementia Friendly Brent after first working with the charity on a homeless project ten years ago.

Michelle told us she feels passionately about the work the charity does for those living with dementia.

“It has affected me. I know quite a lot of people actually whose parents have got Alzheimer’s or dementia.

“I think it’s something that is affecting everybody one way or another.

“It’s becoming more and more common which is very sad. I think it’s so terrible.

“A friend of mine’s father died of dementia during lockdown. He was Irish, he really was completely lost to dementia and all he kept doing was singing Irish folk songs the whole time and sort of going back to his youth.

“I just think it’s so cruel. It’s such a cruel, cruel disease and it doesn’t discriminate at all. It can affect any of us and I just think there needs to be more money raised for research into these cruel diseases.”

Ashford Place CEO Danny Maher says having someone of Michelle’s profile has helped the charity highlight the condition: “I would view dementia as kind of a cinderella condition. I think there is over 900,000 people living with dementia in the country. It’s a massive amount of people but you don’t hear about it a lot. You hear of cancer and other conditions but not dementia.

“And the thing about dementia is thankfully most people living with dementia will have a carer: A husband or wife, son or daughter. There is an equal number of carers in the country trying to support their loved one 24/7 with very little help to be honest and even recognition that they’re going through this.

“So what Michelle has helped us to do is to expose that kind of reality so that people are more aware and understand what the condition is and actually to de-mystify it a little bit as well.”

Michelle observes, “It’s been a bit of a taboo in a way.

Danny continues: “But people think, ‘They’re just getting old’. And clearly it just isn’t. And because of that there’s a lot of people going around without even having a diagnosis and that’s shameful.”

Michelle also points out it is the wider family that suffers as much as the individual. She saw this with her Eastenders co-star Barbara Windsor who passed away in December after a long battle with Alzheimer’s.

“I think the hardest thing is how it affects the family and directly the person who is looking after.

“For instance with Barbara Windsor, she had Alzheimer’s obviously and I think of her partner Scott in the last few years. I think it’s very, very difficult when you’re losing someone to that. It’s so hard.”

“They’re disappearing in front of you,” Danny adds.

“I think the diagnosis rates are improving as well with GPs having a better understanding of dementia.

“But what is a fact is there isn’t enough support. Someone said to me last year, an Irish woman, ‘I took my husband to the doctor. He told he had dementia and I haven’t had any support since then’.

“So basically you get your diagnosis, you go home and you basically live with it without any real support. We have to change that. People are suffering, carers and the people living with dementia.”

The global pandemic and the ongoing restrictions and lockdowns have only added to the problems of those already suffering.

Michelle says: “Anyone who has any illness just can’t seek help like they could in normal times. It’s very, very difficult.

“People with dementia need contact, they need to be constantly talked to. They need the opposite of isolation.”

Danny says: “One of the complaints from our older Irish women in particular- It’s not a complaint, it’s just a reality- is how much physical fitness they have lost since March simply because they’re not going to the shops or doing the normal things they would do like visiting people, going on holiday, whatever. And because of that they feel that they’re losing their ability to just simply move around.

“It’s fine doing the zoom and the digital stuff and the doorstep stuff but it doesn’t replace the face-to-face contact every day that used to be available for people.

“It’s going to be a big problem when this is all over but we’re going to have to do our best.”

Saying goodbye to loved ones, or not being able to, has been hard during the pandemic. Michelle saw one couple’s final goodbye made worse by both dementia and Covid-19.

“I went to a funeral during the last lockdown. My friend’s parents, who were both in their 80s, both got dementia at the same time. They had full-time carers at home and they had it very, very, very badly. When Maurice died, it was awful at the funeral because just looking at Josie was so sad because she obviously didn’t really know what was going on and nobody could touch each other. It was just tragic. It was just awful. And now she is on her own. It’s just awful what it does to people. Really awful.

“It’s very, very tough but hopefully it will make us all into better, stronger people.

“I’ve lost quite a few people along the way to Covid and dementia and to cancer actually this and it’s been a really, really tough year. I think for me it’s just important to give something back and help people as much as you can. If you can shine a little light and use your- I hate the word- ‘celebrity’ in a positive way then that’s great.”

After Michelle started the ‘A Conversation with..’ series, Ambassador Adrian O’Neill, stage and screen star Christopher Biggins, Birds of a Feather star Lesley Joseph and Irish World award-winning journalist Fergal Keane have carried it on.

Danny says: “The therapeutic value of this series is incalculable to be honest and it’s so easy to do because you don’t have to leave your house. I think we should be doing more of this.

“What is great about the series is the excitement amongst our older people when they hear that people like Michelle, the ambassador and other famous people are going to be talking to them. It’s powerful therapy. It just gives that added excitement and a bit of a change from the boredom and monotony.

“People like Michelle give their time. They love it. It gives them something to look forward to. It is a rare moment for them to meet with a celebrity.

“They enjoy it so much.”

Michelle continues: “It’s about communication. All these people are really missing contact. I suppose that’s the hardest thing for people as they get older, especially living on their own. If you’re an older person sitting at home on your own all day it must be awful because communication keeps people going. It keeps them alive. It adds a bit of sparkle. They need places like Ashford Place. It’s the hub of the community for them. With this whole pandemic, that is what’s really awful- Youth theatres, dementia-friendly cafes- All these places have just gone and some of them may not even open up again.

“I love doing it. I love seeing their faces and they laugh a lot which is nice. They all seem to be laughing and enjoying it. You see how much joy it brings into their lives and it makes it all so worthwhile. 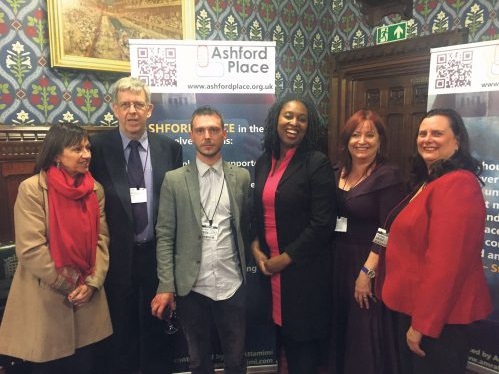 “I think people need to be aware of how much these diseases affect people and we’re not even just saying older people now. People in their fifties are now getting dementia and Alzheimer’s. At least Ashford Place is doing something very positive to try and help and I wish more places out there would have events like this to be honest.

“Lesley Joseph and Christopher Biggins instantly said, ‘Yes, of course we will’. I think people get it. They want to help. They want to give back to the community, they really do.

“It could be Chris’ mum or Lesley’s mum. It could be his friend or her friend. I’m sure we all know somebody who has been affected by dementia or Alzheimer’s. I’m sure of it.”

The performing arts is facing some difficult times. On this subject Michelle says: “I do feel sorry for young people especially people starting out in their careers or that have left drama school and can’t do anything. I think it’s really sad. Mental health issues are just going through the roof. These are difficult times but there are people who are helping each other and it really is a time for people to get together and help their communities.

“But I think it’s going to be very tough for independent films because of Brexit anyway but also Covid. It’s going to be quite a tough time but then in tough times there’s also innovation, creativity. People are still going to be creative even in times like this, probably even more so.”

Although she is not sure if she has any Irish blood, Michelle has certainly visited Ireland a lot.

“I love it. I’ve filmed in Ireland a lot actually.

“From the times of the troubles, when I was in Eastenders in ’88, we were always going over to do The Kelly Show or some other chat show or something and always staying in The Europa Hotel.

“In fact, I met Van Morrison at the Europa Hotel. What a night that was. It was probably the most fun night ever. It was brilliant. That’s all I’m going to say.

“And one year I was Daniel O’Donnell’s ‘Belle of the Ball’. I went over to Donegal but I had to be a secret. He’s not supposed to know who they are so they put a blanket over my head and I thought, ‘What’s happening?’ I thought I was being kidnapped.

“It was really funny because I had to keep swapping cars and that sort of thing and I was like, ‘This is bizarre, this is weird’. I thought it was some strange TV show, like a prank or something. But that was great fun.

“Then I ended up going to his house for dinner and I met his mum and his family and it was amazing.
“Then in the evening I went to the ball and they made me feel so special and it was just a wonderful, wonderful night.

“I’ve been to Ireland a lot. I love it. I love Ireland. They’re always very welcoming, the Irish, and I’m not just saying that. They are.

“I’ve got very good friends who live in Dingle. I love to go to Dingle. I really miss going there. I used to go there quite a lot as well. I can’t wait to go to the Galway Film Fleadh and all these places that we were supposed to go to this year but those plans had to go. I think we’ve got a lot to look forward to next year.”